The Shipbuilding Monument of the Shipyards Lower Lonsdale, North Vancouver, BC 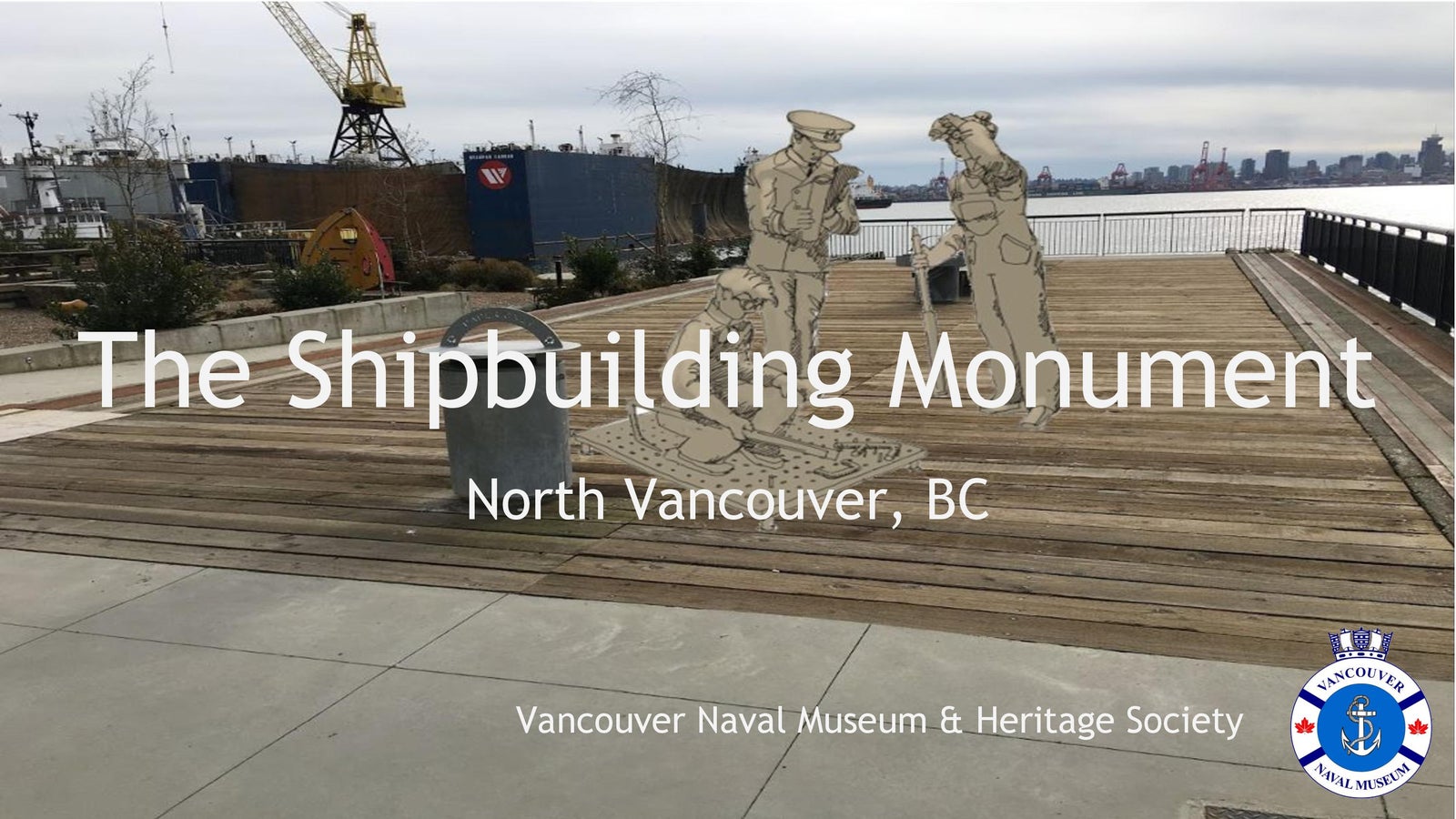 As the Rotary Club of West Vancouver Sunrise President, Matt Gul is helping the Vancouver Naval Museum and Heritage Society, Robert McIlwaine, and King Wan to realize the idea to construct the monument was initially conceived by the Naval Officers' Association of BC.
President Matt Gul said that "as a West Vancouver Club, we are supporting this project and I'm trying to bring all the North Shore Rotary Clubs together to make a bigger contribution to this great project because the Shipyards Monument will be an important landmark of the North Shore."
The purpose of the monument is to provide lasting recognition of the shipbuilding industry in North Vancouver, which along with other facilities in the lower mainland, made a huge contribution to the provision of 250 Victory Ships and 50 naval ships during WW II.
Burrard Drydock alone employed more than 14,000 workers, including about 1500 women with equal pay and benefits.  The industry has continued to build vessels for the RCN, other government departments, the towboat and fishing industries, and ferry operators.
We have the below presentation which outlines the project and progress to date.
So far the team has raised around $100,000 of the $300,000 needed to complete the project.
THE BATTLE OF THE ATLANTIC
Rear-Admiral Bob Auchterlonie, in his 2019 Battle of the Atlantic message in the Pacific Navy News
Lookout stated:
“Esquimalt, BC, is approximately 5,000 kilometers from Halifax N.S., and 7,600 km from London, England.
In fact, we in Victoria are closer to Tokyo than Berlin. So why should Canadians on the Pacific coast care
about the Battle of the Atlantic?
The answer is simple. When Canada declared war on Germany in September 1939, and sent ships and
sailors to sea on convoy escort duties, the whole country committed to the effort. Men and women from
every corner of the dominion volunteered to serve in the Royal Canadian Navy (RCN). Thousands of
British Columbians from all walks of life served in the RCN”
Another story, not so well known, was the huge effort by Canadians to build new ships to replace those
lost during the Battle of the Atlantic and expand the merchant fleet to meet the increasing demand for
supplies to the war in Europe. BC shipyards played a major role.
World War II
Since the earliest European contact shipbuilding has been a part of British Columbia’s economic and social history, with the busiest and most record-setting activity occurring during the Second World War. Some 250 Victory ships and 50 naval vessels were built in BC shipyards from 1939 to 1945, with more than 14,000 workers employed at the Burrard Dry Dock alone. With neighbouring North Van Ship Repairs, the waterfront became the centre of shipbuilding in BC. With women hired to fill the gap while men went to war, Burrard was the first in Canada to employ them in
shipbuilding. They were not just relegated to office and menial custodial jobs, but excelled in the precision detail
work of the electrical, sheet metal and machine shops. The women also pulled their weight alongside the men in
the pipe, plate and blacksmith shops as shipwrights and reamer’s helpers, welders, burners and bolters.
Post-War Construction
After the war naval destroyer escorts, ferries, icebreakers, tugs, log barges, fishing and other vessels were constructed, adding value to BC’s growing economy.
Today
Today, under the National Shipbuilding Strategy (NSS), the first of three fisheries research vessels has been turned over to the Canadian Coast Guard by Seaspan’s Vancouver Shipyard. The second has been launched, and the third is
well under construction. The first of two naval supply ships is also under construction at Vancouver Shipyard.
The Project
There has been little recognition for the thousands of BC workers, who made such a huge contribution to the war.
The Shipbuilding Monument, saluting this great effort, will consist of three bronze statues, symbolic of British
Columbia’s robust shipbuilding activity during the Second World War. The statues will depict a male shipyard worker
using a torch to bend pipes, a female worker taking a break and a naval petty officer unrolling a drawing.
Designed to engage people, the sculptures will be at ground level on the waterfront walkway, site of the original
shipyards. Their positioning will allow visitors to take photographs of the monument and themselves with the
life-size statues.
The sculptor of The Shipbuilding Monument is Norm Williams. He created the Roger Neilson and Pat Quinn
statues at Rogers Arena in Vancouver, the Vancouver Fire Fighter Burn Unit Statue, and the monument to BC’s fishing
industry workers outside the Gulf of Georgia Cannery National Historic Site in Richmond, BC.
The Challenge
A total of $350,000 is needed to complete The Shipbuilding Monument on the North Vancouver Waterfront. Contribution categories reflect ship types built, or to be built, by Vancouver’s shipbuilding industry. Donors in all categories will receive a charitable donation tax receipt and an embossed certificate. If desired, they will
be recognized in their category on the Vancouver Naval Naval Museum website. Donors in the Corvette and higher categories will receive recognition on a plaque at the monument site.
● Shipbuilding Legacy $50,000 or more
● Naval Supply ship $30,000 - $50,000
● Ice Breaker $20,000 - $30,000
● Destroyer Escort $10,000 - $20,000
● Victory Ship $5,000 - $10,000
● Corvette $2,000 - $5,000
● Minesweeper $500 - $2,000
● Landing Craft $100 - $500
Progress
Approximately 60% of the pre-foundry work (concept, design, and sculpturing) has been completed. The detail work on the female worker is nearly finished while the male worker and naval overseer are at the detail stage. 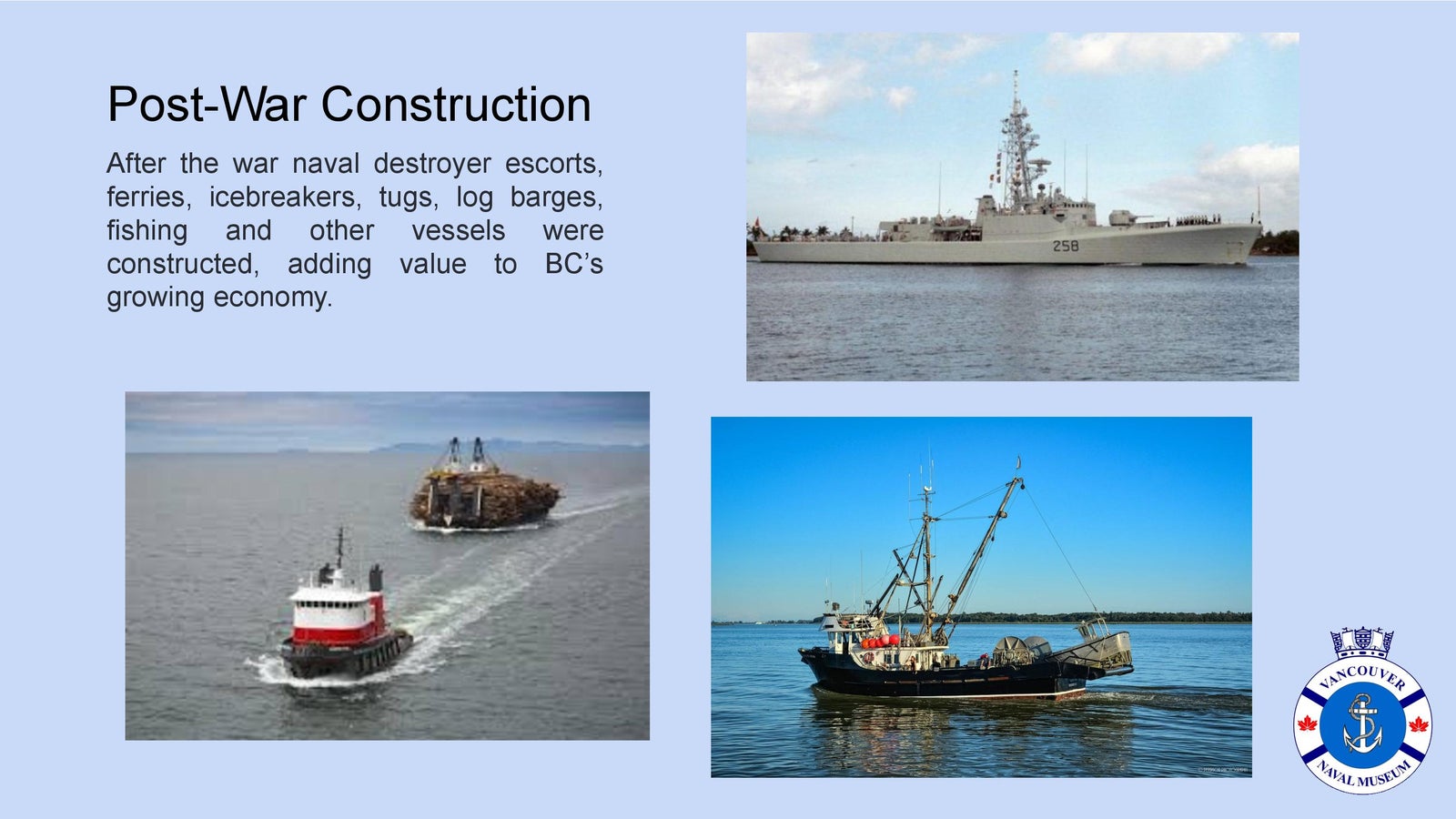 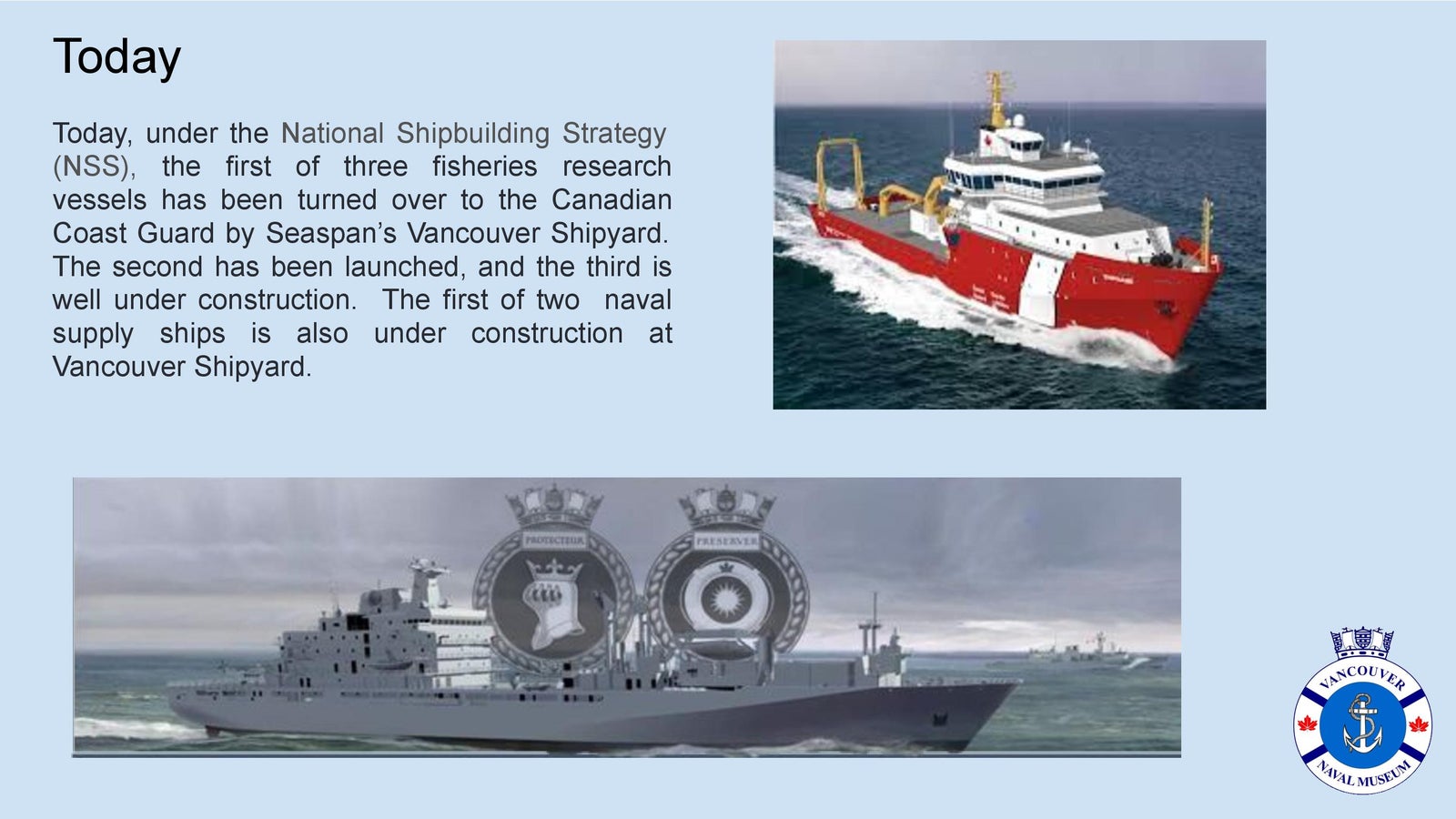 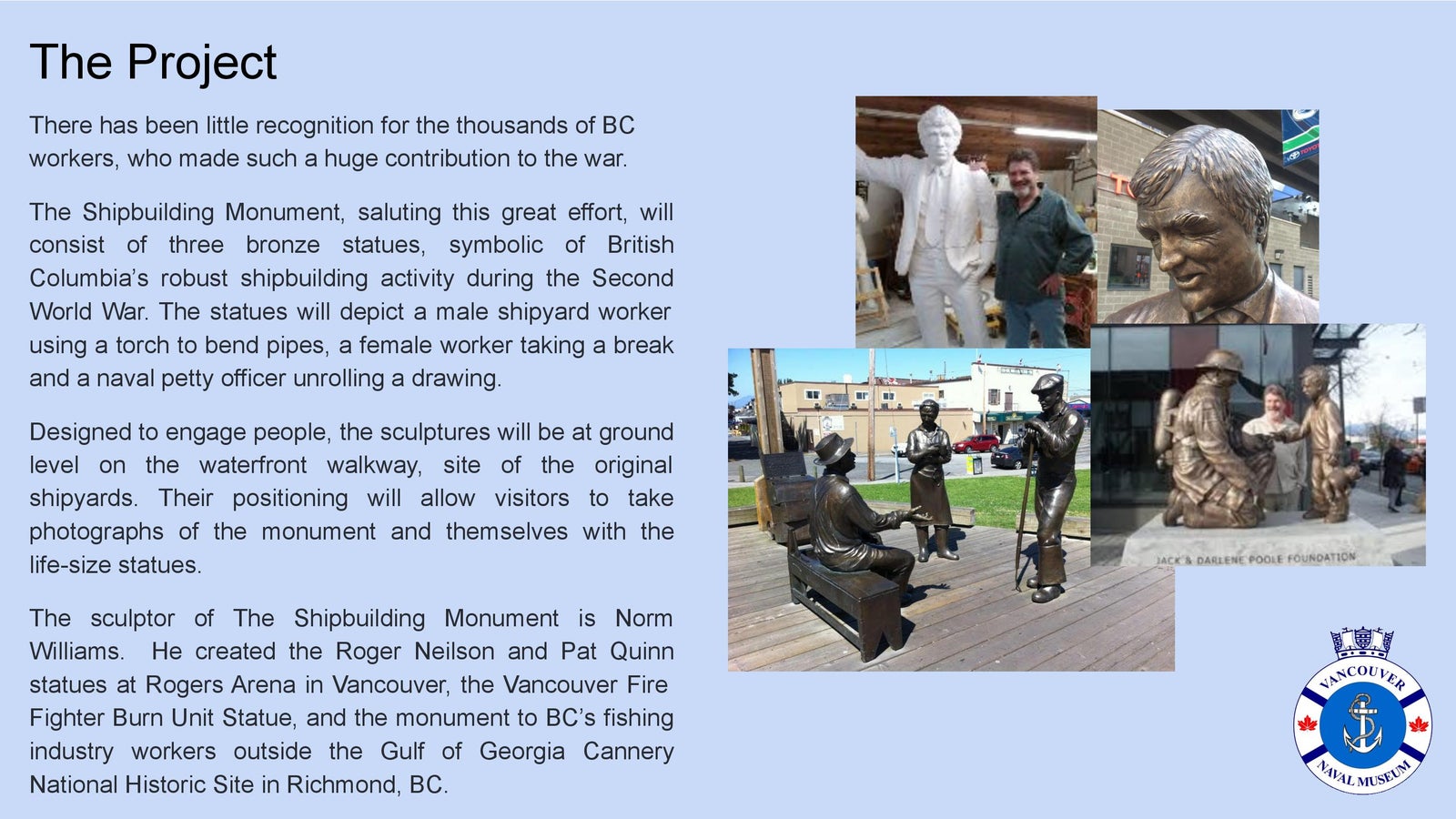 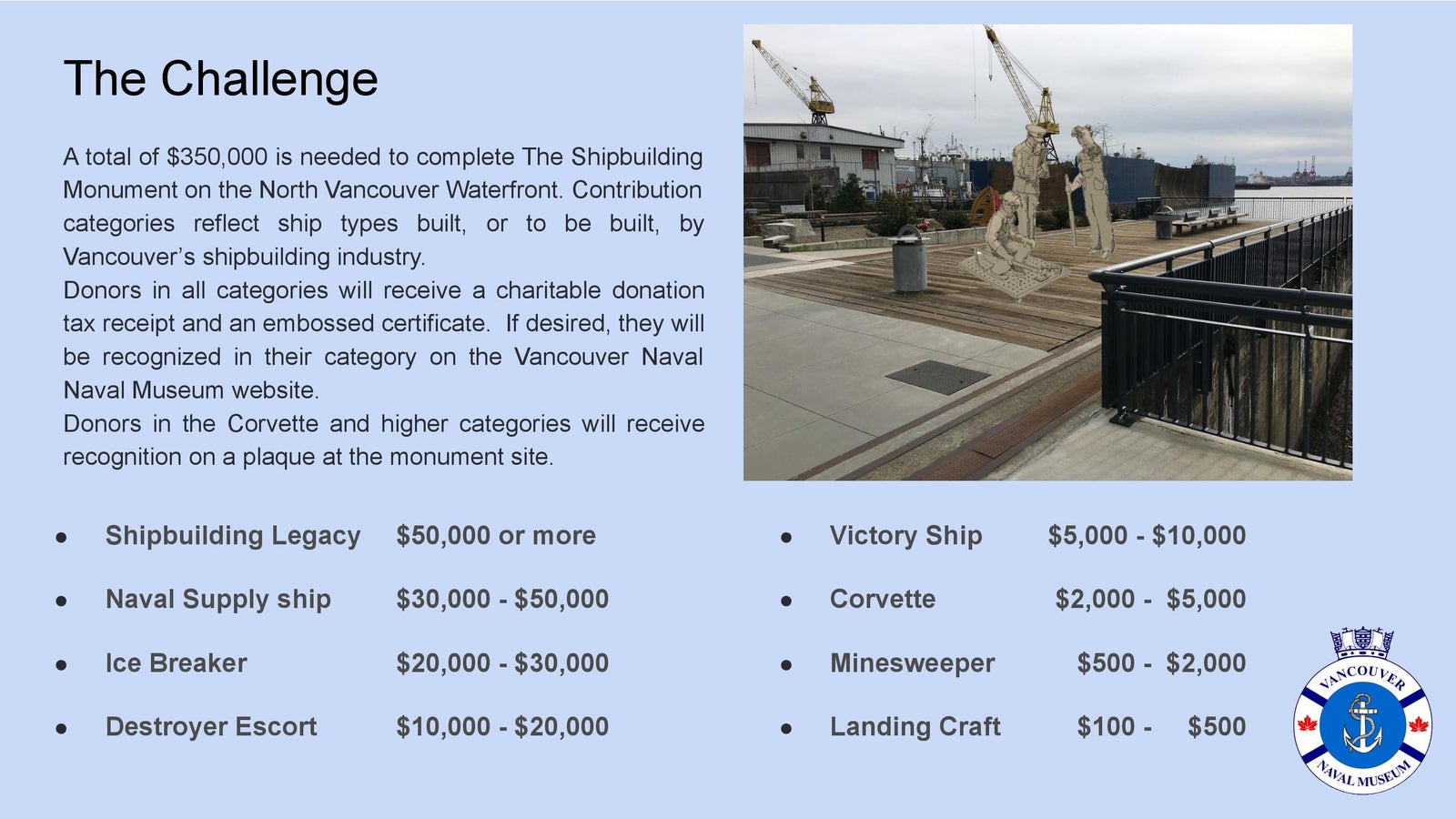 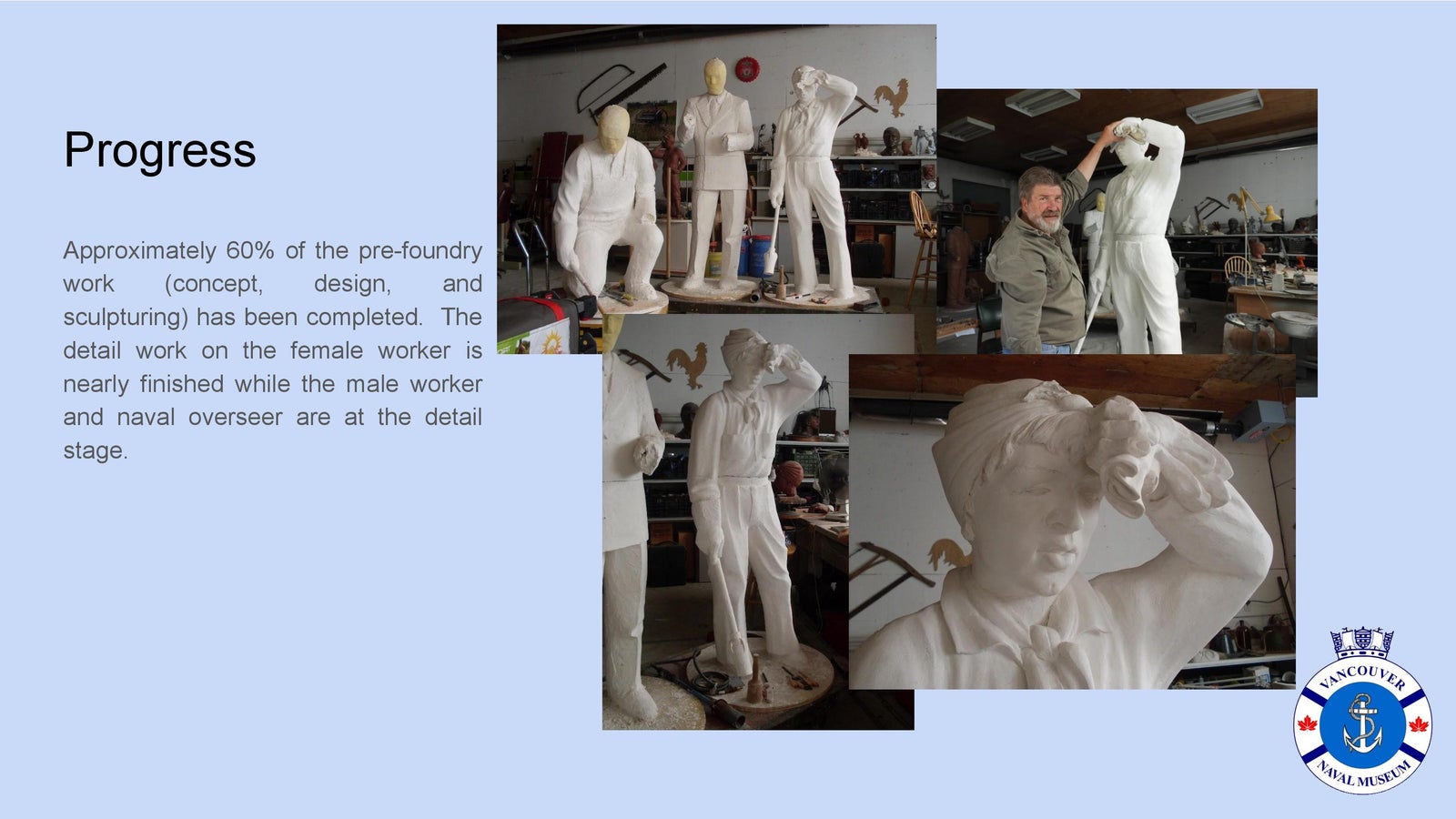 If you are interested in the Lower Lonsdale shipyards, and want to learn more about it, or if you are thinking about buying or selling your properties, please contact Matt Gul, who is a top luxury real estate agent situated in West Vancouver, who can help you with all of your needs. To contact Matt Gul please call him at 778.888.8888 or email him at matt@mattgul.com