Have your say on West Vancouver's plan to improve neighbourhood character 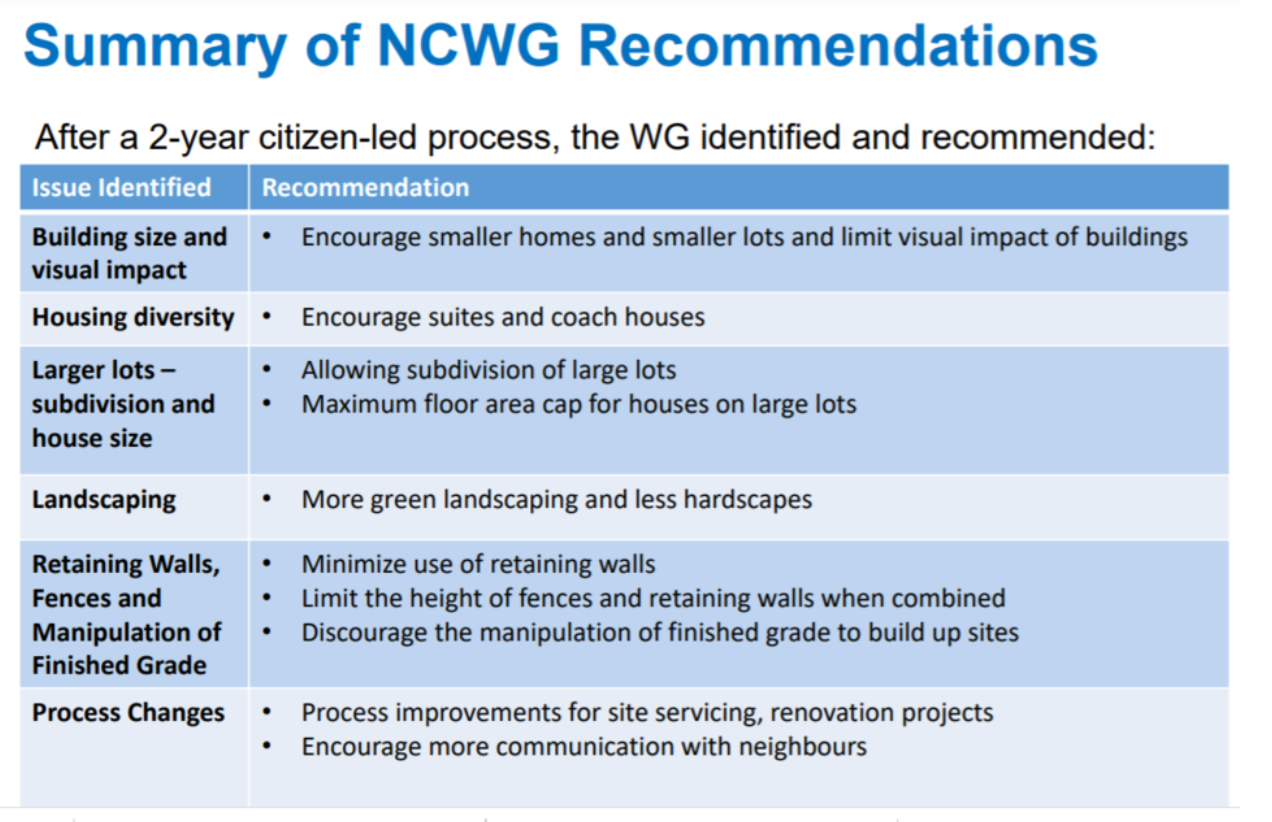 Above is a summary of the District of West Vancouver Neighbourhood Character Working Group's recommendations. . By District of West Vancouver.
Residents have the opportunity to have their say on the district’s plan to improve neighbourhood character, increase housing diversity and prevent new out-of-place monster homes.
Next month there is a public hearing scheduled, where West Vancouver residents are given the opportunity to have their say on the district's plan to improve neighbourhood character, increase housing diversity and preventing out of place monster homes.
The district has faced difficulties with developments in family dwelling zones, and other factors that have affected neighbourhood character, and heritage.
The Neighbourhood Character plan has been in the making for over two years led by the Neighbourhood Character working group, who work on new regulations and policies that can respect important values of our district.
Yet, this problem is not new, maintaining neighbourhood character has been an issue for years in West Vancouver, with many people who have worked on solving the problem.
Over the past 26 months, the Neighbourhood Character working group have been working hard, creating a 34-page report that has 35 recommendations across six different categories that include:
- Reducing actual building size
- Encouraging suites and coach houses
- Limiting the visual impact of houses as seen from the street
- More green landscaping
- Simplified building processes
- Earlier neighbour consideration from builders
All of the recommendations were supported by the council back in December 2020.
Since then staff have been working on a detailed review of the recommendations and how to implement them. Staff have returned to the council on June 28th with their plan on how to move forward along with proposed amendments.
The staff proposed amendments to the official community plan bylaw, the zoning bylaw, and six corresponding bylaws along with updated coach house design guidelines.
Zoning amendments are necessary for West Vancouver, they will help reduce the size of new single-family homes in the district. Along with this, it will encourage secondary suites and coach houses for improvements to coach house regulations.
The boulevard bylaw, which includes landscaping and parking, and the soil removal and blasting bylaws are among the six corresponding bylaws being updated to support the recommendations.
A clever idea is to offer bonuses to homeowners for building coach houses and secondary suites, this will create more housing options by encouraging people to build these types of houses.
Back in the 1980s, floor area ratios were as high as 0.45 of the lot area and were later lowered to 0.35 plus buried basement along with other “bulk” modifications.
* The floor area ratio of a house is the area of the house divided by the area of the lot.
The recommendations call for a reduction in the FAR for new houses from the current 0.35 to 0.30 on lots larger than 7,285 sq. ft. For lots between 4,500 sq. ft. and 7,285 sq. ft., the buildable area for the house would be a fixed 2,200 sq. ft, reduced from 2,550 sq. ft.
This will quite frankly lead to smaller homes being built, which will inevitably make more affordable housing, rather than pushing to fill up a lot with a home with no backyard or front yard space.
To encourage housing diversity, the working group suggested a bonus FAR for a secondary suite of up to 500 sq. ft. or a 0.05 FAR bonus, whichever is less.
For coach houses, the working team recommends a FAR bonus of 800 sq. ft. or 0.10 FAR, whichever is less.
The bonus would apply to lots on homes built prior to 1976 if the principal dwelling is retained.
The intention of these changes is to discourage people from demolishing older homes, and instead encouraging the development of coach homes on older properties. Along with how the amendments will make it easier to subdivide a property due to the changes to the minimum lot size needed for subdivision.
If you were curious about how the community has been reacting to these possible amendments, the final recommendations were positive. With over 80 per cent of the respondents in favour or offering no comment on most of the changes. Moreover, the floor plan ratio changing had the worst rating however, it still managed 70 per cent support.
After a long discussion, the council supported staffs' recommendations to give second and third reading to the six corresponding bylaw amendments, which are not required to go to a public hearing, and to proceed to a public hearing on the proposed official community plan and zoning bylaw amendments.
The official community plan and zoning bylaw amendments are proposed to be put into effect on January 31, 2022, pending council adoption to allow industry and property owners time to adapt to the new regulations.
The six corresponding bylaws are proposed to be effective immediately if adopted by council.
The public hearing has been set for July 27 at 6 p.m.
If you would like to learn more about West Vancouver's plan to improve neighbourhood character, or if you are thinking about buying or selling your properties, please contact Matt Gul, who is a top luxury real estate agent situated in West Vancouver, who can help you with all of your needs. To reach Matt Gul, please call him at 778.888.8888 or email him at matt@mattgul.com
Source: https://www.nsnews.com/local-news/have-your-say-on-west-vancouvers-plan-to-improve-neighbourhood-character-3921624