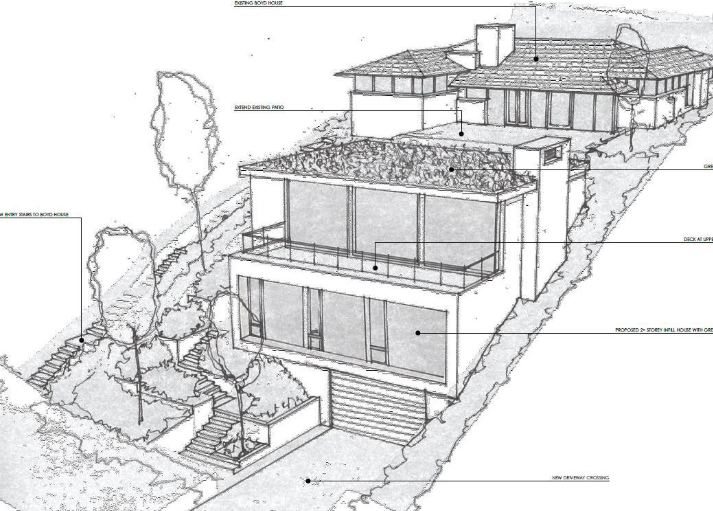 West Vancouver council has saved a heritage home and legalized its first short-term rental in one fell swoop.
Monday night, Council voted in order to give the 1956 Ron Thom-designed Boyd House permanent protection, located at 985 Duchess Avenue. However it received permanent protection due in exchange for subdividing its lot and allowing the character home to be used for short-term rentals, which are otherwise not legal in the district.
A brand new 2,800-square-foot two storey home with a basement will be built immediately south of the Boyd house, on the 3,015-square-foot subdivided lot. Then the home will also be dug into the site and would also be accommodated with a vegetation roof.
The vote was after a public hearing in which heritage advocated and residents who are in favour of the project outnumbered those opposed to the project by a margin of about five to one.
This project has earned the permission from the district’s heritage advisory committee, as well as two heritage preservation groups, North Shore Heritage and the West Coast Modern League.
Adele Weder, who is the league founder said that allowing short-term rentals on the property will end up achieving a wider audience who will appreciate the home, and will actually rent it out specifically due to its architectural pedigree.
However not everybody is on board with the subdivision. Robert Moser, who lives in another Ron Thom home next door. Moser said that the proposal would actually compromise the architectural value of both properties, along with his yard’s privacy.
“Ron Thom houses are about two things: house and garden. There is a relationship. By severing or shall we say subdividing the property on which Boyd House sits, one greatly
diminishes this careful juxtaposition of house and garden,” he said.
Although there are few people arguing against it, the vote from the council was unanimous.
Coun. Nora Gambioli said the new house might be too big for the small lot, but she added it beats the alternative.
“If we want to support heritage structures, then this is the cost,” she said. “This is a really delicate balancing act that we keep having to do. If we do not support this application, the house will likely be demolished, and a home of maximum size will appear in its place. And I don't think that's the way to go.”
Due to the fact of there being no hotels in West Vancouver, it is difficult to stay here while visiting, therefore Coun. Sharon Thompson said the introduction of new short-term rentals fills a need while saving the Boyd House and even including a new home, all of which she supported.
However if the district will continue to allow short-term rentals, Coun. Craig Cameron and Mayor Mary-Ann Booth both have agreed upon them having to set up ground rules.
If the district is going to start allowing short-term rentals, Coun. Craig Cameron stressed the need for council to set some ground rules.
“I think we're going to have to be very careful about the short-term rental in the general community. But for now, I'm happy to support this,” she said.
If you would like to learn more about the short-term rentals at the Boyd House, or if you are thinking about buying or selling your properties, please contact Matt Gul, who is a top luxury real estate agent situated in West Vancouver, who can help you with all of your needs. To contact Matt Gul please call him at 778.888.8888 or email him at matt@mattgul.com
Source:https://www.nsnews.com/news/short-term-rentals-approved-for-west-vancouver-s-boyd-house-1.24053780
Summarized by: Onur Gul on instagram at @onurgulfilm