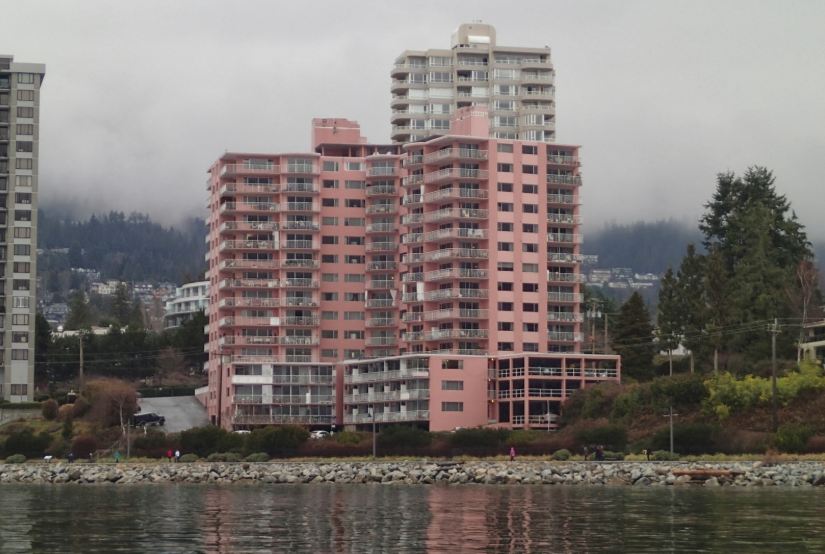 The owners of West Vancouver’s iconic Villa Maris – more popularly known as the Pink Palace – are looking to redevelop the building along with the Shoreland apartments on Bellevue Avenue.
If you live in West Vancouver then you definitely have seen the Pink Palace, The buildings have been owned by the Lachman family for the last 50 years, but family representative Bill Lachman said the 1963 and 1965 buildings need so much work now, all of the tenants would have to be evicted.
“Unfortunately, the buildings are nearing the end of their lives. There are issues such as seismic concerns,” he said. “We felt because we cannot just go in and redo the buildings the way they are, that we would replace them with newer, better designed, iconic buildings for the future.”
Lachman said West Vancouver is badly needing more rental units, especially those that appeal to downsizers, singles and people with pets.
The proposal, which is still in a preliminary phase and hasn’t yet even been submitted to the District of West Vancouver, this proposal consists of two goals, the main is to replace the nine-storey Shoreland building at 2190 Bellevue with a 21-storey rental building with 206 units, as well as a separate complex, that is six-stories, with 24 units, below market rental building.
“I’ve found out everybody in West Van has a different idea of who should live there. We originally liked the idea of first responders… There’s also teachers. It’s up to West Van,” he said. “We would design those units with families in mind.”
When that it complete, the developer would replace the Pink Palace with a strata building, although the total number of storeys and units hasn’t been decided yet, Lachman added.
Lachman also noted that the tenants were all very positive with the idea, him and his staff have met with almost all of the tenants of the buildings that would be demovicted. (Meaning that you will be evicted from your rental housing as the landlords want to demolish the building.) Lachman also promised them compensation packages, in help to find new accommodations, and first right of refusal to move into the new building once it is completed.
Live-in building manager Pavel Semenec agreed.
“After 50 years, nothing is up to code anymore. You name something, it’s not up to the standard,” he said, noting the building has low railings, single-pane windows, no air conditioning, and the pipes and plumbing are nearly caput.
“I know it’s an iconic building but everything comes to an end once in a while,” he said.
Semenec said he feels he and other tenants have been well taken care of by the Lachmans and feels assured that will continue through construction.
This building has some very high average duration of tenancies, the average at the Pink Palace is six years, nevertheless some of the tenants have been living there for 25 or even 30.
“They’re our most important people,” Lachman said.
Architectural historian Jeffrey Thorsteinson said he was sad to hear rare Canadian examples of the Miami Beach strand of modernism might go.
“To me it speaks to the playful exuberance of the early to mid-’60s. In architecture that’s been termed the New Sensualism versus the more serious modernism that reigned before and after,” he said in an email. “Here that’s embodied in the bold use of colour, exploitation of the plastic possibilities of concrete, curved forms, and decorative iron work. … For me, the building has always connoted a sense of leisure and exoticism, something which transforms your experience of the Ambleside shore, imbuing a feeling of beach life.”
The special place the Pink Palace has in the hearts of those who walk and drive by isn’t lost on Lachman and so he has given instructions to his architect, James Cheng (who did the Shaw Tower and Shangri-La) to make sure the new building lives up to the reputation of the site.
“It will be iconic for the future. It will be equally as wonderful… I keep telling [the architect] it’s got to be pink,” he said. “We love the Villa Maris. We’re not doing this just to make a fast buck. This is for the long-term. This is with respect to the future of apartments in places like West Van so that the buildings don’t just deteriorate and we are looking out for the tentants.”
Lachman said they will be before council before the end of the month to get some direction from council on whether they should proceed with filing a formal rezoning application. If that goes well, it could be another year or two before a final vote, followed by time to get building permits.
While that goes on, they’d focus on relocating tenants, Lachman said.
Construction on the Shoreland’s replacement would likely take another two years or more, taking the project into 2025 before demolition of the Pink Palace would be considered. Meaning the tenants of the building have plenty of time to worry about where to move, with this not being rushed.
If you would like to learn more about the Pink Palace's demolishment, or if you are thinking about buying or selling your properties, please contact Matt Gul, who is a top luxury real estate agent situated in West Vancouver, who can help you with all of your needs. To contact Matt Gul please call him at 778.888.8888 or email him at matt@mattgul.com
Source:https://www.vancouverisawesome.com/2019/10/05/west-vancouver-pink-palace-villa-maris-redevelopment/
Summarized by: Onur Gul on instagram at @onurgulfilm