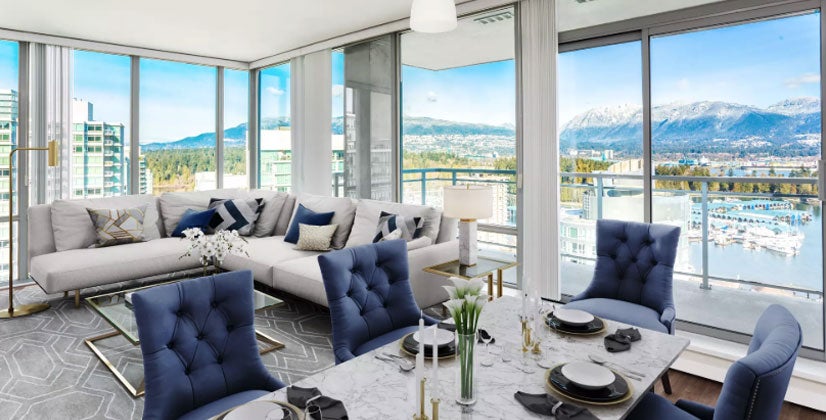 Recently in Vancouver, High-end buildings are seeing a high volume of properties going up for sale
If you're currently placed in the market looking for a luxury condo to move into in Downtown Vancouver, there are plenty of beautiful high end condos located all around Vancouver.
At the Living Shangri-La at 1128 West Georgia St. and 1111 Alberni St., there are 17 condos for sale, ranging from $950,000 to $5.788 million.
There are 13 listings in the three-tower Harbour Green development at 1039-1069 West Cordova St. and 277 Thurlow St. in Coal Harbour. All of the listings are over $4 million, six are over $10 million and one has a list price of $38,888,000.
However, there are even high-end listings of buildings that are not even completely built. Like 1550 Alberni, a future 43-storey structure that is designed by Japanese architect Kengo Kuma, which will not be completed until 2020, however there is already 12 condos for sale there ranging from $1.74 million to $5.6 million.
What’s happening? To some degree, non-resident owners are selling their local pied-a-terres because they don’t want to pay vacancy taxes introduced by the city and the province.
“Many of these homes were purchased as second homes or third homes,” said real estate consultant Michael Geller. “People loved having a nice place in Vancouver for when they came here. Then we got the empty-home tax. That’s one per cent, but then the province comes in with the speculation tax, and if the unit is worth more than $3 million, then you have a (school) tax as well.
“Even if they’ve got a lot of money, at a certain point people say this is too much.”
A good example is a 58th-floor condo at Trump Tower that is on the market for $5.88 million. Realtor Wendy Tian said her client is selling because of the vacancy and speculation taxes.
“That’s the reason they want to sell,” said Tian, who works for Luxmore Realty. “My client bought it a couple of years ago. They wanted to use it as a vacation home, but now it’s impossible.”
Not only this condo but plenty of others are now being quickly put on the market as their owners are trying to get rid of these taxes off their hands.
Layla Yang of Dracco Pacific Realty is selling a 43rd–floor condo at Trump Tower for $3.98 million. She also says the vacancy and speculation taxes are spurring people to sell.
“Some of my clients never wanted to sell,” she said. “They bought it for like a vacation home (that) sometimes they can live in, and all of a sudden they have to pay this kind of an empty tax. They feel like it’s a lot of money … they feel it’s not worth it, so they list their property.”
This has led to a lot of inventory. Real estate sources say two to three per cent of properties are typically for sale in condo buildings. Trump Tower has 290 units, which means there would normally be six to nine units for sale, not 15.
There are 293 units in the two Living Shangri-La buildings, so it would also normally have six to nine units for sale, not 17. The Harbour Green complex has 209 units, so typically four to six condos would be for sale, not 13.
This truly shows that these taxes really are adding a lot more houses into the market adding a much greater choice for anyone to choose from.
Josh Gordon of Simon Fraser University’s School of Public Policy isn’t surprised many luxury condos have been put up for sale.
“Both (taxes) are going to hit pretty hard,” said Gordon, an assistant professor at SFU. “If you leave a place empty, you could potentially be subject to three per cent (of the assessed value).”
That could be expensive — a property assessed at $4 million could face a tax bill of $120,000. In theory an owner could avoid the taxes by renting out their place, but Gordon said owners are “loath” to rent luxury condos.
“It’s one thing to rent a run-of-the-mill place, but with these high-end places, it’s hard getting a tenant who can pay you enough,” he said. “And you’re going to be very wary of any damage to a place like that, so that changes the dynamic.
“The other thing is (using a condo as) a long-term store of value. If you have this new policy regime which discourages foreign ownership through the satellite family and foreign-owner component (of the provincial speculation tax), then that changes your calculation.
“A lot of people will be selling, not necessarily because they’re subject to the tax, but because they think the price (of their property) is going to go down.”
Prices have dipped downtown, and some units are taking a long time to sell. A condo on the 67th floor of the Trump Tower recently sold for $2.95 million, but it took over a year to sell, and was reduced over $400,000 from the original sale price of $3.389 million. This means that now would be a great time to go purchase your dream condo as the prices are still very great because of all of the competition.
Still the seller did well: they bought the condo for $2,038,346 in November 2016.
If you would like to learn more about the current condo market, or if you are thinking about buying or selling your properties, please contact Matt Gul, who is a top luxury real estate agent situated in West Vancouver, who can help you with all of your needs. To contact Matt Gul please call him at 778.888.8888 or email him at matt@mattgul.com
Source:https://theprovince.com/business/real-estate/vacancy-taxes-prompt-sale-of-luxury-condos-in-downtown-vancouver/wcm/39bf2936-f4e3-41f3-b4ed-4d020b7926ef
Summarized by: Onur Gul on instagram at @onurguldrone