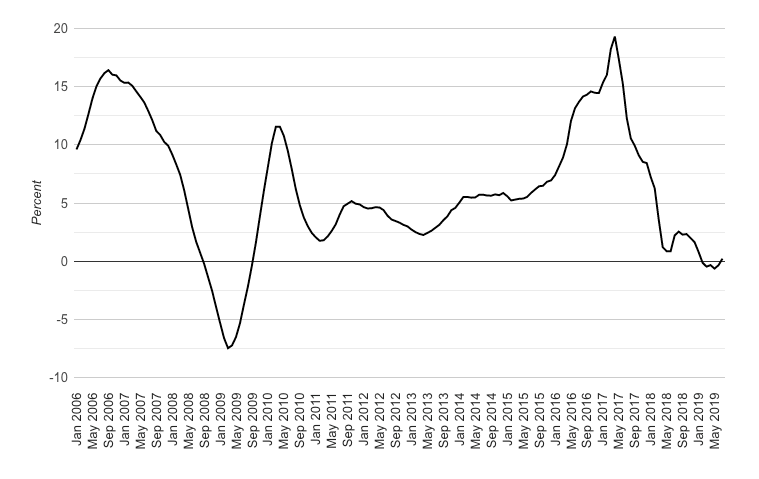 Above is the 12 month price in change of a typical home across Canada.
Canada's real estate market has been dropping for a while, but now after seeing minor prices declines so far this year, real estate prices have began to grow again. Canadian Real Estate Association (CREA) numbers show that home prices have returned to growth in July. National price growth is being driven by a boom in markets that underperformed over the past 5 years.
After around a decade Canadian real estate prices have returned to growth. The Canadian real estate prices have a made a big move in the previous month. CREA’s seasonally adjusted, national benchmark price hit $620,900 in July, up 0.57% from the month before. This represents an increase of 0.22% compared to the same month last year. For the people that do not understand the growth of this, this monthly gain was so large that it ended up pulling the market out of its negative growth.
If you look at the graph you can see that the prices are down just a bit from the peak.
Prices are down just a bit from the peak, but things improved on the annual trend for a second consecutive month. The national market’s benchmark at $620,900 is just 1.62% from the all-time peak for prices. The annual pace of growth is now positive, but it’s only the second improvement. Two improvements don’t make a trend, but they can start one – so it’s worth watching for a reversal.
Biggest Gains Were In Markets That Underperformed
Markets that underperformed over the past 5 years made the largest move. Ottawa’s benchmark price made the largest annual increase to $423,900 in July, up 8.84% from last year. Montreal followed with a benchmark of $366,400, up 7.23% from last year. Guelph came in third with the benchmark hitting $546,600, up 6.73% from last year. Of those three, only Guelph outperformed the national market.
Canadian Real Estate Benchmark Price
The price of a typical home in Canada’s largest real estate markets. 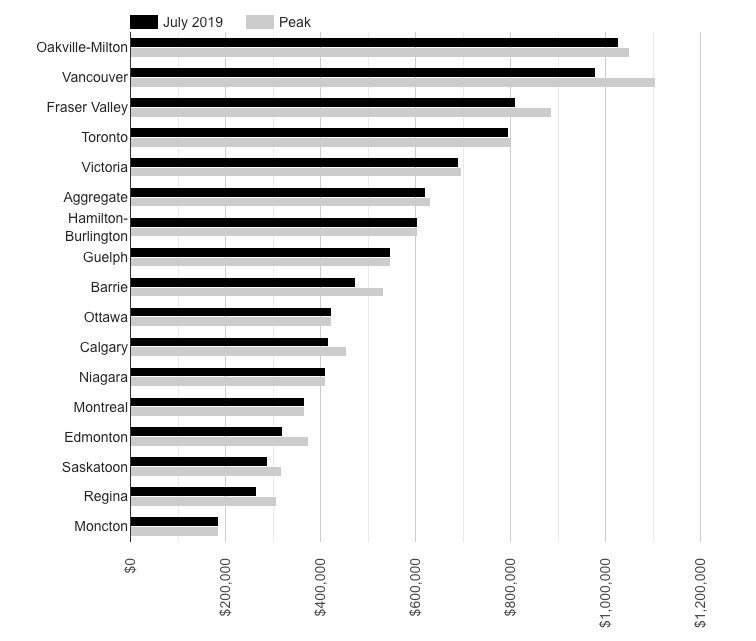 Leading the way lower is Western Canadian real estate. Greater Vancouver’s benchmark showed the largest drop to $978,500 in July, down 9.38% from the same month last year. Fraser Valley, a market surrounding Vancouver, fell to $809,800, down 6.58% from last year. Regina came in third with a benchmark of $265,400, down 4.55% from last year.
Canadian Real Estate Price Change – 1 Year
The 1 year percent change in the price of a typical home, in Canada’s largest markets. 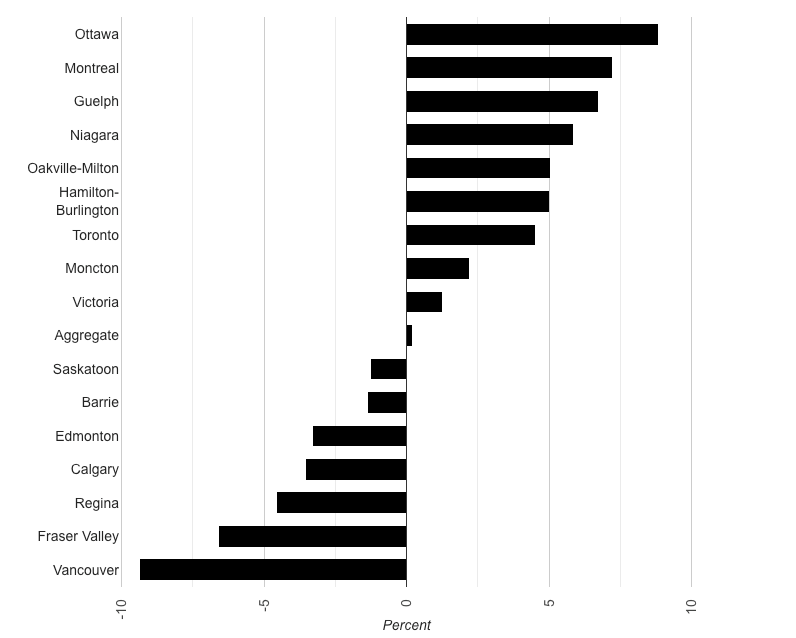 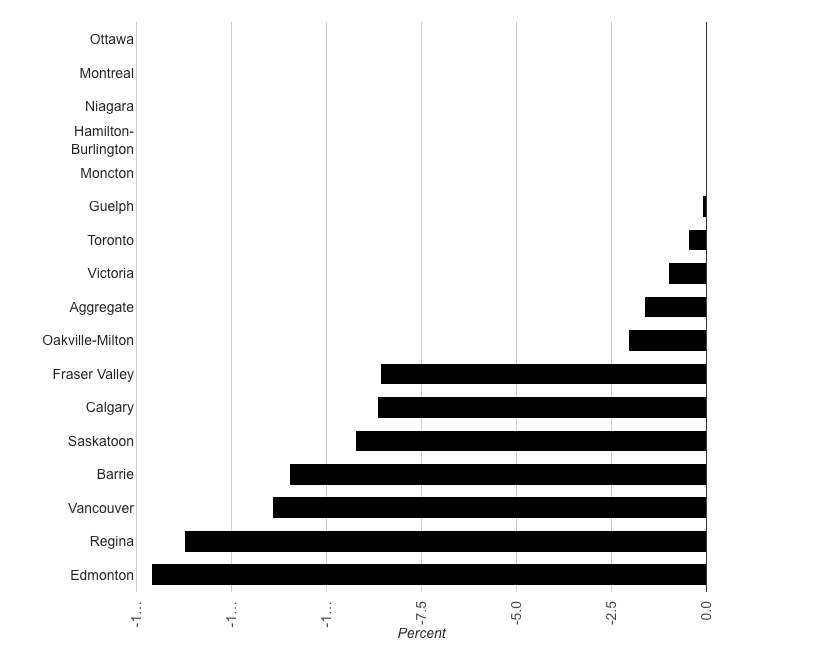 Also Western Canada was the home of the biggest declines from its peak. Edmonton however had it worst, being the furthest from its peak at $319,200 a whopping 14.61 per cent from last year. Regina followed in at $265,400 this is down 13.75 per cent from the previous year. Vancouver ended up being ranked third, for the largest fall from its peak at
Western Canada was home to the biggest declines from peak. Edmonton’s benchmark is furthest from peak at a benchmark of $978,500, down 11.42% from last year. With the exception of Barrie, all markets over 3% from their peak benchmark price are in Western Canada.
Canadian real estate prices are back to positive year-over-year gains. This comes after national prices made a decline for less than half a year. It also comes ahead of the government’s first-time homebuyer plan. The plan will inject over a billion dollars in liquidity, for affordability.
Also if you are thinking about buying or selling your properties, please contact Matt Gul, who is a top luxury real estate agent situated in West Vancouver, who can help you with all of your needs. To contact Matt Gul please call him at 778.888.8888 or email him at matt@mattgul.com
Source:https://betterdwelling.com/canadian-real-estate-prices-return-to-growth-after-brief-decline/
Summarized by: Onur Gul on instagram at @onurguldrone