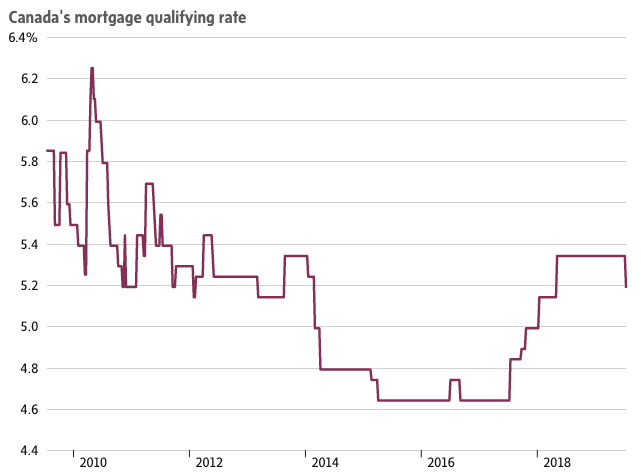 The interest rate used in Canada’s mortgage stress tests has fallen for the first time since 2016, making it slightly easier to become a homeowner.
The mortgage qualifying rate has recently dropped 0.15 per cent going from 5.34 to 5.19 per cent. It has been locked at 5.34 since May of 2018, these figures are from the Bank of Canada. The rate is derived from the most frequently occurring five-year, fixed posted rates at Canada’s Big Six banks. (Market rates are much lower, and some discount lenders offer five-year fixed rates as low as 2.47 per cent.)
During 2017 and 2018 The qualifying rate was increasing steadily as the Bank of Canada raised its key interest rate, and as bond yields headed higher.
But there’s been a notable shift in lending conditions as many central banks across the globe look to ease policies. Moreover, Canada’s five-year bond yield, which influences the direction of five-year fixed-rate mortgages, which has tumbled this year. As a result, those mortgage rates have plunged roughly 70 basis points, according to a recent research note from BMO Nesbitt Burns.
These stress tests are very important as they are used to ensure homeowners and prospective buyers could continue to afford their mortgage payments at higher interest rates, and apply only to federally regulated lenders. The Department of Finance first imposed a stress test on insured buyers, or those who typically make a down payment of less than 20 per cent of the home’s purchase price, starting in the fall of 2016. Canada’s banking regulator followed suit with a similar test on uninsured buyers, which went into effect in 2018.
The second test is widely credited as one of the factors that has weighed on resale activity in Canada’s real estate market.
This new qualifying rate does not seem like much but it does make a large difference. For someone who is making a 20 per-cent down payment, and if they earn $50,000 a year the lower rate will allow them to afford a home that is roughly $4,000 more expensive, according to calculations from RateSpy.com.
However for those earning $100,000 a year, with the same down payment, they can buy a home that is about $8,300 pricier. (RateSpy assumes no other debts and a 30-year amortization.)
If you would like to learn more about Canada's mortgage qualifying rates or if you are thinking about buying or selling your properties, please contact Matt Gul, who is a top luxury real estate agent situated in West Vancouver, who can help you with all of your needs. To contact Matt Gul please call him at 778.888.8888 or email him at matt@mattgul.com
Source: https://www.theglobeandmail.com/investing/personal-finance/household-finances/article-canadas-mortgage-stress-tests-just-got-a-little-easier/
Summarized by: Onur Gul on instagram at @onurguldrone