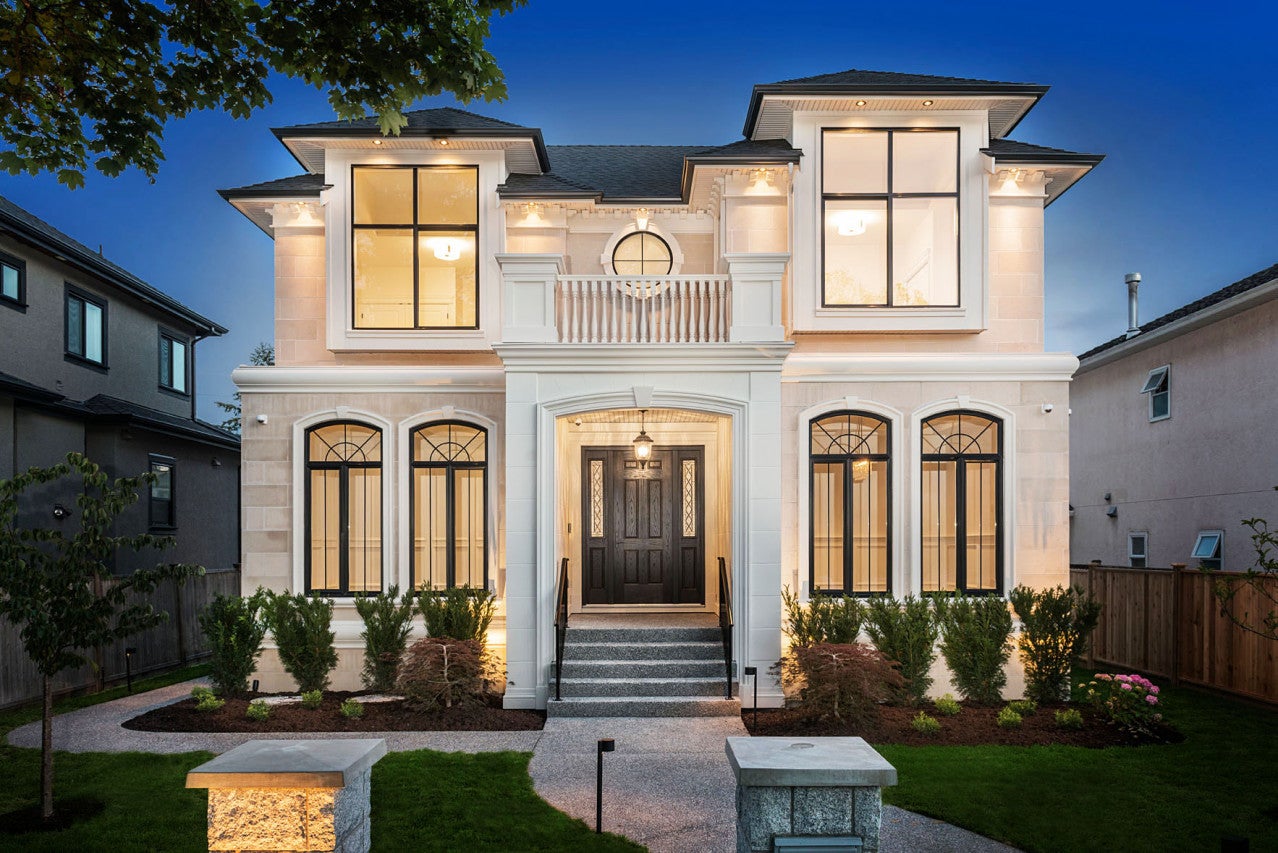 Property in Metro Vancouver is often sold as an investment, not as a place to live.
Nearly one-fifth of detached homes and almost half of the condos in Vancouver are not occupied by owners.
These figures all come from data released by the Canadian Housing Statistics Program on Tuesday.
This study presented that 54.3 per cent of condos were owner-occupied, meaning 45.7 per cent of condos were not-owner occupied. This is compared to 81 per cent of single-detached houses, with 19 per cent being not-owner occupied.
But Andy Yan who is from Simon Fraser University showed that not-owner occupied numbers have skyrocketed during the Vancouver housing crisis. Yan said in 2009 that a City of Vancouver study found 35.2 per cent of condos in the city were not-owner occupied. The new study found the number grew to 46 per cent in 2018, an increase of 10.8 per cent in only 9 years.
“It’s gone up substantially, city-wide,” said Yan, director of SFU’s City Program. “It will probably be even higher when you look at particular neighbourhoods.”
The bigger surprise, though, might be that 19 per cent of single-detached houses are not-owner occupied in the city.
“Nearly one-in-five, single detached homes are this kind of investment stock,” said Yan. “That was a little bit unanticipated, versus 11 per cent in Toronto. Data (in other studies also) suggests the new homes that have replaced (older), single-detached homes are bigger. They’re not necessarily denser, but they’re bigger.” 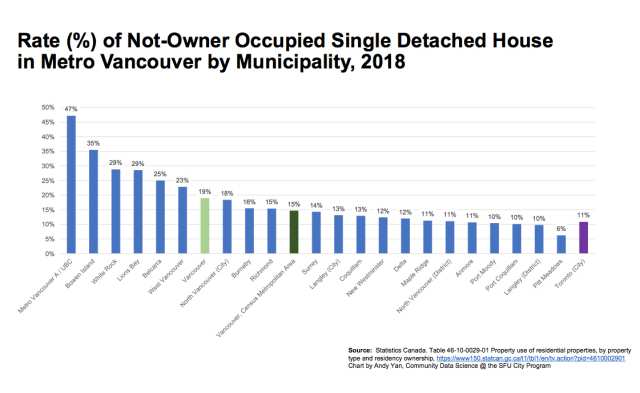 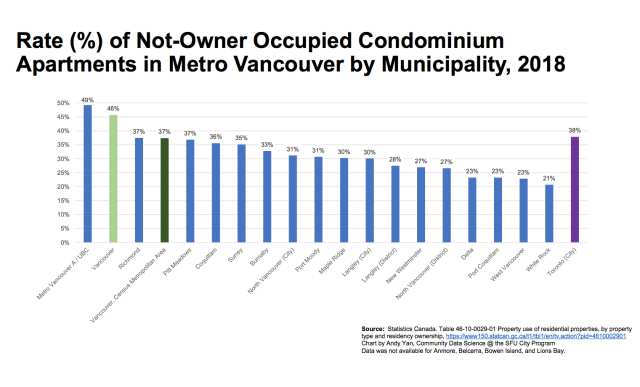 ^Chart of not-owner occupied condos in Metro Vancouver 2018. Chart by Andy Yan of Simon Fraser University’s City Program from data compiled by Statistics Canada. For John Mackie
The new figures come 10 years after Yan released a landmark study, Ownership, Occupancy and Rentals: An Indicative Sample Study of Condominiums in Downtown Vancouver.
“(Former mayor) Gregor Robertson had talked about the concern around empty condos, which I had also heard on the street,” said Yan, who was then working as a planner for architect Bing Thom. “I was like, ‘Let’s look at the best data that we have, and then run with it.’ ”
Yan’s study showed that if you tried to ascertain empty condos by electricity use, the number of empty condos was around five to eight per cent. But the number of not-owner occupied condos in the study was 52 per cent by B.C. assessment data or 61 per cent from homeowner grant data.
“When we looked at assessment records, that’s when things went a little crazy,” he said. “We found it’s not necessarily just about empty units, it’s about units that are being held as an investment. That was unanticipated.”
Yan said the high amount of investment not only affected the price of condos, it affected what type of condo was built, because investors prefer smaller units. Another factor is the rise of short-term rental firms like Airbnb.
“Much of the housing that was built in Vancouver was for investment or for (financial) safety,” he said. “Look at Hong Kong right now. Frankly, if the People’s Liberation Army tanks start going down Causeway Bay you’ve pretty much lost everything, if you put all your money in Hong Kong.
“So if I put money in a condominium in Vancouver, I might lose a bit of money, I might lose 10 or 15 per cent, but I’m not going to lose 100 per cent of it.”
This could be problematic for renters if there is a crisis in Hong Kong and Canadians who live there and own property in Vancouver decide to come back to Canada.
“This is the precariousness of this type of rental stock,” he said. “In one way it has provided a stock of rental housing, but it’s been eroded by short-term rental, and it could potentially be eroded by these global events.”
A man of many analogies, Yan has a line for the growth of not-owner occupied property over the last decade.
“What used to be a smouldering cigarette butt on the side of the road is now arguably a raging forest fire,” he said. 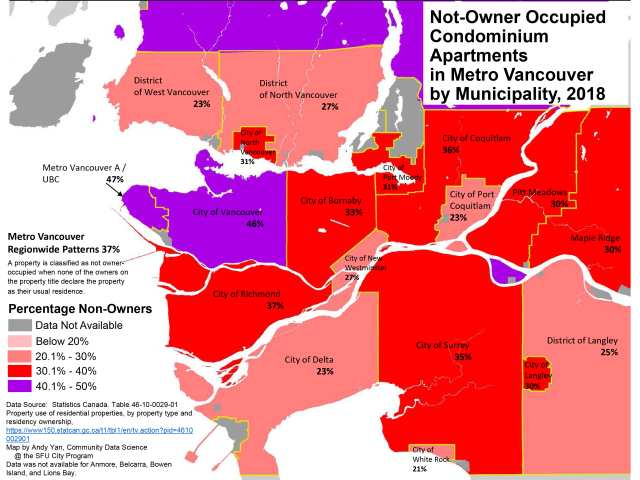 ^Map showing the percentage of not-owner occupied condos in Metro Vancouver. Map by Andy Yan, SFU City program.
Also if you would like to learn more about non-owner occupied houses, or are thinking about buying or selling your properties, please contact Matt Gul, who is a top luxury real estate agent situated in West Vancouver, who can help you with all of your needs. To contact Matt Gul please call him at 778.888.8888 or email him at matt@mattgul.com
Source: https://vancouversun.com/news/local-news/not-owner-occupied-property-skyrockets-in-vancouver
Summarized by: Onur Gul @onurguldrone on instagram