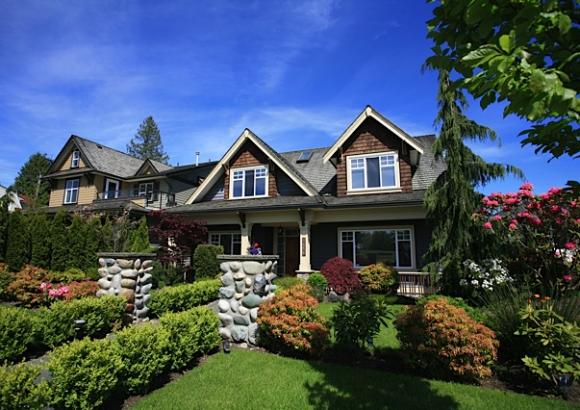 Greater Vancouver detached real estate is still spiraling. Real Estate Board of Greater Vancouver (REBGV) numbers show sales dropped to a 20 year low in April. The decline in sales is combining with a multi-year high for inventory. The result is Greater Vancouver detached prices are now at the lowest level in three years.
Greater Vancouver Detached Real Estate Prices Down Over 11%
Currently, the price of "typical" detached homes are dropping rapidly, according to the board's benchmark. REGBV reported these benchmarks. Greater Vancouvers detached benchmark fell to $1,425,200 in April, down 11.1% from last year.
Vancouver East's typical detached home fell to $1,357,200, which is down 12.1% from last year.
However, Vancouver West did even worse, with its benchmark dropping to $2,948,400 this is down 13.4% from last year.
Those losses range from $177,000 to over $450,000 for the typical home – over just the past year.
The losses on detached homes have been getting larger for the past few months. Last month’s 11.1% annual decline is the largest seen since April 2009. The annual pace of growth has now decelerated for 14 consecutive months. Prices are now the lowest they’ve been since April 2016 – three years ago
Fewest Detached Real Estate Sales In Over 20 Years
The detached real estate in Greater Vancouver have fallen to a low for the month of April. REBGV recorded 586 sales in April, this up 10.8% from March, however it represents a 27.02% decline compared to April from last year. The monthly increase is seasonally expected, but the annual decline is not. This was the fewest detached sales for April in at least 20 years, as far as REBGV data went back. As for the City of Vancouver, it was the fewest detached sales for April since 1992.
Greater Vancouver Detached Real Estate Inventory Rises 10%
In Greater Vancouver the amount of new detached home listings fell, compared to last year REGBV reported 2,085 new listings in April this is up 16% from the month before yet this expected. However this also represents a 15.89% decline compared to April last year, this however is not expected.
The total number of active detached listings also reached a multi-year high for April. During April there were 6,236 active listings this is up 10.39% from the month before. This is an increase of 8.71% compared to the same month last year. That is the most detached inventory for the month of April since 2014.
Falling sales and rising inventory is pointing to potentially lower prices. The sales to active listings ratio (SALR) fell to 9.4%, down a third from last year. When the ratio is above 20%, the market is a seller’s market during this point is where prices are expected to rise. The ratio below 12% is a buyer’s market, where prices are expected to fall. Between 12% and 20% is balanced, and the market is priced right for demand. Currently the market is considered a buyer’s market.
Also if you are thinking on buying or selling your properties, please contact Matt Gul, who is a top luxury real estate agent situated in West Vancouver, who can help you with all of your needs. To contact Matt Gul please call him at 778.888.8888 or email him at matt@mattgul.com
Source: https://betterdwelling.com/city/vancouver/vancouver-detached-real-estate-sales-drop-to-20-year-low-prices-roll-back-3-years/#_
Summarized by: Onur Gul on instagram at @onurguldrone